What?!? You didn't know that October was Squirrel Awareness Month?

Well, if this is this first you're hearing about it, already so late in the month, it's partly my fault (see comic below), but perhaps you just don't follow enough squirrels on social media. Because if you followed even one squirrel, you would have been familiar with the not-quite-trending-but-not-for-lack-of-enthusiasm hashtag, #squirrelawarenessmonth (ad nauseum... - Ed.).

I, myself, follow quite a group of squirrels on Twitter, and consider @Ratatosk4 to be our online guru. Ratatosk is, of course, the Norse Squirrel God, and authority on all things squirrel and good in the world.

But who is @Ratatosk4? That is, who types the tweets? A he, she, or they? A human, or an actual squirrel? Or other?

That's the thing about the Internet. To paraphrase the old New Yorker cartoon, on the Internet, no one knows if you're a squirrel.

This is all to say that today's comic features @Ratatosk4 as a little homage to all of the awareness and enthusiasm this entity brings to the Internet and my life. Thanks, o great squirrel deity!

And while I'm at it, a little shout out to all of my online squirrel friends - Rocky (who does weekly Sunday Squirrel Shoutouts on the Twitter), Lolly, Beebz, Hippy, Emergency, and so many more! 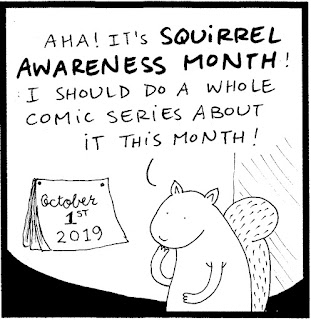 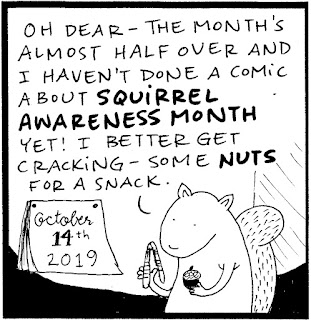 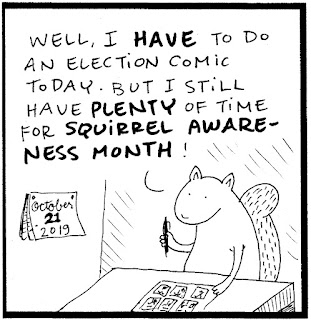 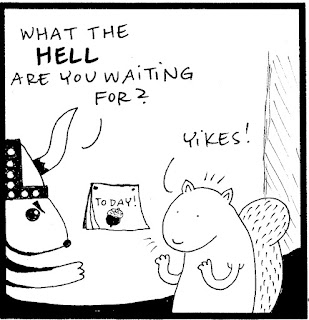